Tomek Tyndyk’s images emerge from the interval, from the theater’s corridors and passages. These provide the backdrop for Tyndyk’s experiment. The artist tries to capture places, objects and people engaged in an intimate creative process, revealing what is unnamed, personal, often invisible. The characters he encounters are fragmentary, and the space disintegrated. This wandering on the border between the real and the unreal, the recurring motifs, multiple layers, and seemingly absurd transfigurations make up an extraordinary album – a multifaceted (self-)portrait that is theatrical and non-theatrical at the same time. The book, designed by Anna Nałęcka-Milach, is a creative elaboration of Tomek Tyndyk’s project. However, far from summarising or recapitulating the latter, it becomes its yet another key element. It enables viewers to peep into a hermetic and often inaccessible world, rich in mysterious processes which go on both within the theatrical act itself and within the associated human relationships. 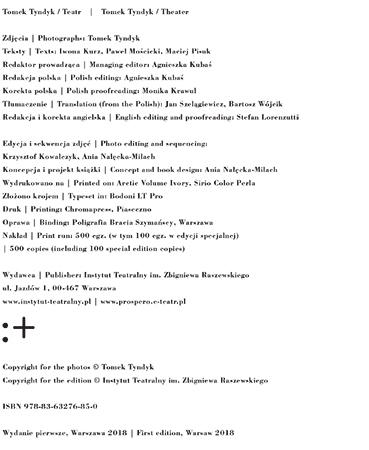